This article was originally published by armoredheat.com

We used the mTrigger biofeedback [system] to measure the amount of Lower Trap and Middle Trap Activation when performing two common scapular exercises:

Surface EMG measures the amount of electrical activity in the muscle directly under the pad, which is how we are able to measure the activation of these muscle groups.

We found that the MAX recruitment was slightly higher with the Y slides than it was with the prone Y, although they had pretty comparable peak activation numbers. 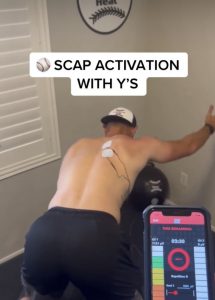 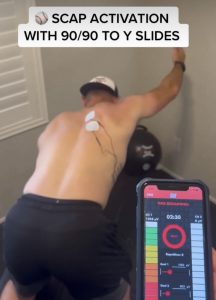 We believe the 90/90 to Y slides do a better job of maintaining recruitment due to the position force feeding all 3 Primary Scapular Motions of the Low Trap:

That is the Lower Trap Trifecta

Clinically, we have had a lot of success in using many different exercises to zero in on the low trap but very few have studied how they compare to the Gold Standard “Y Exercise”

There are a TON of limitations to this Case Study and this is just step 1, but we wanted to explore our curiosity and see if there was any substance to what we were seeing clinically.