Gamification in Physical Therapy: Everybody Wins

Gamification in Physical Therapy: Everybody Wins

If you’ve ever played Mario Kart – or been thwarted by a video game more complex – you’re probably familiar with “button mashing”, or have felt the soreness in your thumbs from pressing into the controller. And why? To win! Or at least not lose shamefully. As human beings, we are programmed to want to succeed – and every tee-ball dad, Jeopardy fan, or Call of Duty player among us can relate. Athlete or not, there is something (dopamine, to be exact, but we’ll get to that later) about visually seeing a goal achieved that brings out our best efforts.

It is exactly this innate response to games that has brought about an age of gamification, or “the use of game design elements in non-game contexts to encourage a desired type of behavior” (Richter et al). Physical rehabilitation is no stranger to this tactic, as evidenced not only by the fact that your great aunt can beat you at Wii Bowling, but also by persistent innovations in motion capture and therapy-specific gaming and feedback systems. With the normalization of technology like AR (augmented reality) and increased comfort with – nay, dependence on – tech-based interactions, this type of feedback is only going to become more integrated into daily life.

How many of us have already brought gamification and social elements into our workouts, our digital learning, our business incentives? The expansion of gamification is attributable to one simple fact: play works.

So, how does gamification work?

According to Janssen et al in their 2017 article Gamification in Physical Therapy: More Than Using Games, “[Games] involve reward-related dopaminergic systems in the brain that are known to facilitate learning through long-term potentiation of neural connections.” In other words,

From this neural learning, we can achieve behaviors and real biological outcomes that positively influence therapy. One of those most powerful behaviors is motivation, which “is demonstrated by an individual’s choice to engage in an activity and the intensity of effort or persistence in that activity” (Garris et al., 2002). As physical therapists, athletic trainers, occupational therapists, effort and persistence are the bread and butter that make outcomes possible. By providing audiovisual stimuli and reward systems, we can create structures of success for patients, giving them real-time and long-term feedback that motivates them to perform effortfully and accurately. By encouraging the effortful and accurate integration of neuro-motor pathways through voluntary muscle control (volitional contraction or relaxation), we facilitate motor learning and make gains in neuromuscular control that are critical to full recovery. “It is arguable that interactive, engaging game-based rehabilitation tools… thereby facilitate[ing] recovery of residual motor and cognitive function” (Anguera et al. 2013). Now that’s an argument we can get behind.

Gamification is as much a neuromuscular process as rehab itself, connecting the mind with the body to achieve success.

Then how do we make it work for us?

While BF & G doesn’t have quite the ring to it that PB & J does, we’re here to purport that biofeedback & gamification is just as good of a combo.

Biofeedback is a technique wherein you learn to control bodily functions by observing information about your body’s processes via sensors; this feedback helps you practice making voluntary changes in your body to improve a health condition or physical performance (Mayo Clinic 2019).

So, when we combine the innate human desire to succeed at games and game-like interfaces with the voluntary control of biofeedback, what do we get? We get patients who are empowered by increased effort, informed by real-time data, and motivated by inherent psychological mechanisms. A patchwork of therapeutic success if we ever saw one!

EMG biofeedback has been around for decades, but by bringing the interface to a mobile application (i.e. it lives on everyone’s fifth appendage) we have harnessed the biological and psychological methods outlined above to help patients and athletes achieve their goals. As they make their way through rehab with feedback from mTrigger, they can Train, Track, and Play to get the outcomes they’re working towards. And that’s how everybody wins.

See it in action

How to use mTrigger Games in Single Channel Mode 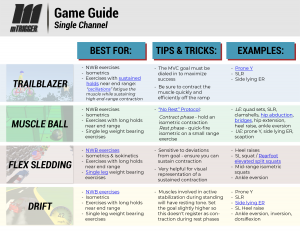 Let us know what you’d like to see more of on our blog by commenting below or getting in touch.