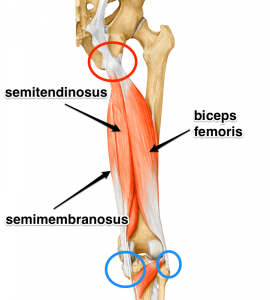 When classifying hamstring injuries, they typically fall into one of two categories: acute hamstring strains (including ruptures) or proximal hamstring tendinopathies.1

Acute hamstring strains, which includes a spectrum of injuries from a mild strain to a full tendon rupture, typically occur with high-speed running or excessive hamstring lengthening.1 During running activities, the biceps femoris muscle is most commonly involved in muscle strains, right at the proximal muscle-tendon junction.1 Activities that combine hip flexion with knee extension to eccentrically lengthen the hamstrings – such as dancing, slide tackling, and high kicking – typically involve a strain of the proximal free tendon of the semimembranosus muscle just off the ischial tuberosity.1 This mechanism of injury for the hamstring tends to lead to a prolonged recovery when compared to a running-caused hamstring strain.1

A typical recovery from a hamstring strain takes about 3 weeks (depending on the severity of course), however, reinjury is frequent (about 1 in 3) if athletes aren’t given a chance for full recovery.2 This is where adequate rehabilitation progressions and return to sport are critical.3 After the initial healing phase, an increase in intensity of exercise and range of motion can be initiated followed by isometrics and slightly faster speeds.1 Eventually, the goal of a rehabilitation program is to gradually increase the intensity of exercise and load on the hamstring tendon while incorporating eccentric training.1

Let’s look at a handful of exercises that incorporate some very important principles when rehabbing after a hamstring injury.

As a whole, the hamstring muscle group includes four muscles: long head biceps femoris (most commonly injured), short head biceps femoris, semimembranosus, and semitendinosus. (PIC OF HAMSTRING MUSCLES) They are responsible for both extending the hip as well as flexing the knee. Since each of these four muscles has a slightly different orientation, line of pull, and muscle action, exercises after a hamstring strain must be specific.4 It is essential to strengthen the hamstring in both knee flexion and hip extension positions.2

Hip extension positions load the hamstrings in a lengthened position.2

For example, the Nordic hamstring fall exercise has the greatest biceps femoris, semimembranosus, and semitendinosus activity compared to a handful of other commonly used hamstring loading exercises.4

Another exercise is a hip lift.

Eccentric exercise helps to mimic movement patterns that are both protective and prevalent in sports. When going from running at 80% to 100% speed, the activation level of the biceps femoris muscle increases by 67% (the semimembranosus and semitendinosus increase by 37%).3 High intensity eccentric loading must be incorporated to reduce the likelihood of re-injury.3  In fact, studies have indicated that decreased eccentric hamstring strength is a greater risk factor for injury than hamstring fatigue is.5

Check out the two exercises below which target the eccentric phase of motion:

With late-stage hamstring rehabilitation, increased speed can be incorporated. Tantrums are a fun and challenging exercise to perform while monitoring for fatigue. See this exercise in action here!

Hamstring injuries range from mild strains to full on tendon ruptures. Regardless of the severity, improper and incomplete rehabilitation can increase the risk for re-injury. A key component of recovery includes regaining strength of the hamstring muscles in positions of both hip extension and knee flexion. mTrigger biofeedback allows you to track progress, increase muscle engagement, and challenge the hamstrings in varying positioning to reach the full effect of each exercise during the rehab process.